Voltea, the world’s leader in Membrane-Capacitive Deionization (CapDI©), for salt-free and chemical-free water softening and desalination, recently held a CapDI demonstration seminar in conjunction with Synergy Ambiental, focusing on the importance of achieving sustainability through water treatment and water reuse.

The seminar was held in Torreón, Mexico, where an Industrial Series System (IS2) was brought to demonstrate the technology first-hand. The participants had the opportunity to learn about Membrane CapDI, engage in a discussion for local solutions, and see a CapDI system run up-close. Additionally, a small water lab was set up next to the system to measure the raw and purified water to validate the results. Conductivity, pH, hardness, arsenic and sulphates were all measured at 50% and 90% removal.

“Our first CapDI seminar in Mexico was a great success! We had customers from the food and beverage, energy, and automotive industries who were very satisfied watching the technology working in real-time,” Guillermo Cuevas, CEO at Synergy Ambiental, acknowledged. “CapDI technology will allow us to provide our customers sustainable projects in potabilization for water consumption, pre-treatment for boilers or cooling towers, as well as water reuse projects”.

Synergy Ambiental (http://www.synergyambiental.com.ar) is an official distributor for Voltea in Mexico and a frontrunner in Membrane CapDI technology. Synergy is located in the north of Mexico, which is considered to be the industrial powerhouse of the country, but the water is scarce in certain areas due to the desert climate. CapDI is especially relevant here as the ground and municipal water present high hardness and high conductivity levels. Along with the conventional salt-free water softening and cooling tower make-up water use for CapDI, clients are also looking into wastewater reuse to take advantage of the robustness for biofouling and particulate fouling. 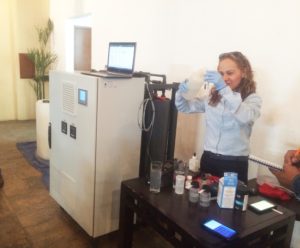 Voltea has been delivering electrochemical water-conditioning equipment to institutional, commercial and industrial customers for over 9 years. Voltea’s CapDI© systems remove dissolved salts from water using electricity at a lower economic and environmental cost than any other available technology. Voltea was recognized as one of the 21 Technology Pioneers 2013 at the World Economic Forum, listed in the 2011 Global Cleantech 100 and won the best new technology award at the 2010 Global Water Summit.